Well the start of a new week sees my daughter Ria, turn 14, so hard to believe that 14 years ago we had a tiny bundle who only weighed 4lb 12oz, she had arrived 2 months early! and now 14 years on and she is growing into a lovely young lady (who is also a typical teenager! lol)  Anyway this card is for her but it hasnt turned out quite as well as I had hoped and envisioned and she still may end up with a 'heres one I made earlier' card that she has already seen as she checks over each of my cards as I make them!  My biggest critic/fan.  I have used an image from Digi Doodle Shop which is part of my winnings from Totally Papercrafts, I have coloured it with copics and generous amounts of sakura stardust, I then cut it out and mounted it onto a card and cut away excess to make a shaped easel card but I had to leave more on the back for stability.  I have also had to use a cocktail stick to add strength to the upright.  I think if I was to make another one I would do things a little differently! but hey ho here it is in all its glory! lol 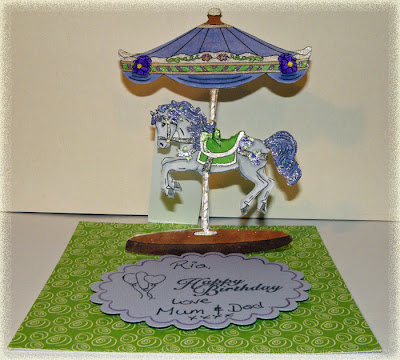 I would like to enter this card into the following challenges:
Secret Crafter Saturday Challenge #103 ~ easel card
2 Sisters Challenge #8 ~ Animal fun
Crafts and Me #14 ~ Something for a teenager
ABC challenge ~ E is for Easel cards