When I was at the show the other week I picked up a couple of templates for making some different cards and I have finally got round to trying one.  I went for a triple pop-up boxy card and I thought it was going to be really difficult but was surprised that I didnt find it too hard!  For my card I chose to use Flopsy in the rain from Crafty Sentiments, I coloured the image with copics then used diamond glaze on the top of the umbrella and dusted lightly with glamour dust, my grass infront is cut using a Marianne die.  I decided to make this card for the challenge over at Totally Gorjuss this week which is NO patterned paper so instead I used texture plates and embossing folders to add texture which I also inked and I made the cloud background following the tutorial over at Crafty Sentiments Tutorial blog.  The sentiment was done on the pc.  For my first attempt at a triple pop-up I'm pleased with how it turned out. 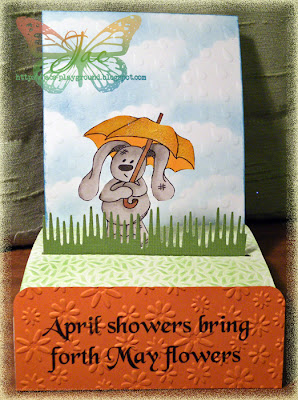 the second photo shows the raindrop texture a little better 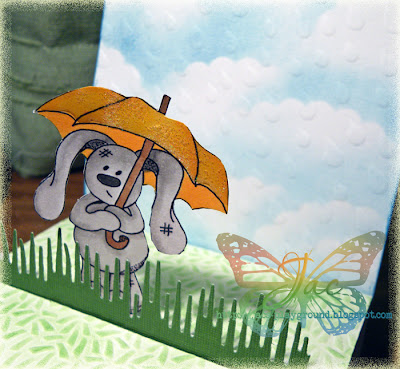