Having a busy time 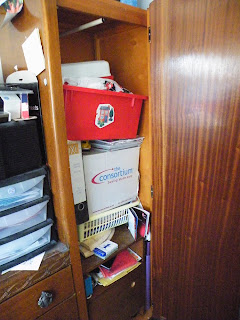 Well I'm on leave for 2 whole weeks and have started my leave with a stinking cold! Typical lol so I went to chemist and got some Actifed so hopefully that will do the trick it does seem to be helping a bit. Anyway I decided that I would use this leave to overhaul my craft room coz boy oh boy does it need it! Kept at it today but it looks worse than ever lol. Although I have managed to clear this cupboard and we are going to put a load of shelves in it to hold baskets which in turn will house various crafting bits and pieces. That may not look like a lot of stuff in that cupboard but believe me it was crammed and I have managed to get rid of so much stuff, just aswell the recycling is being collected tomorrow! Hopefully going shopping on Wednesday to pick up some storage baskets and other bits so when its all finished I will put some pics up but you really dont want to see what it is like at the moment but I did leave myself just enough space so that I can still do some crafting during the evenings! LOL
Posted by Jac’s Playground at 22:06