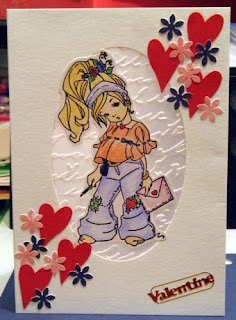 ASFOS challenge this week is entitled Love is in the Air so this is what I made. Image is Sugar Nellie Pen Pal stamp coloured with wc pencils and sakura pens and a tiny amount of glitter added, the aperture is filled with pale pink vellum which has be put thru BS with CB script folder the hearts and flowers are punches and finished off with a gold peeloff, didnt quite end up as I had planned! TFL Well we have some snow but not as much as in some places, I know my mum who is in Kent has had loads, it is snowing here at the mo and I hope it stops soon as I'm on the early shift tomorrow! Ria has no school tomorrow as only about 1/4 made it in today so she is hoping for loads! lol Right better go and sort tea we are a bit late tonight! Bye for now. x
Posted by Jac’s Playground at 18:52