How could I not play along with the spooky halloween challenge over at One Stitch At A Time after receiving my fabulous freebie image for guessing in the Saturday game.  I received this lovely image called Alexandria from Stitchy Stamps.  I wanted to try somethng new (well new for me anyway I know there are loads of you out there that do this and beautifully too) so anyway I printed the image onto some computer acetate and then got out my glue with fine tip and glitters that I bought in Exeter and I went glitter mad!  I usually only use a sprinkling of glitter but have decided to give glitter a real go and this is my end result.  There are a few things I'd do slightly different next time but on the whole I'm quite pleased with my first attempt which is good as last night I was convinced it was going in the bin!  I ave mounted her into black card with the aperture cut away using a Go Create die and I have also used the same die to cut a piece of white for the inside of the card.  The small images around the outside are Daisy & Dandelion stamps stamped in versamark and then mica pigment added (Ria helped with this bit as she thought it was such a cool technique.  And there you have it my spooky halloween card. 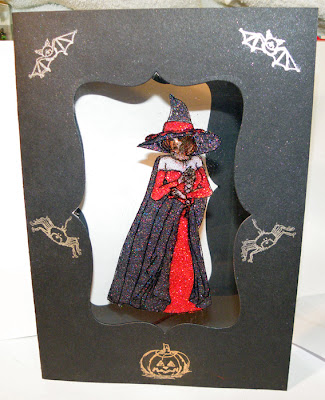 Its really difficult to take a good pic due to the acetate and all the glitter but I hope you get a reasonable idea of how sparkly it looks.
I would also like to enter this card into the following challenges:
Crafty Cardmakers #31 ~ Step away from the square
Incy Wincy Designs #62 ~ Sparkly glitter
A Spoon Full of Sugar #124 ~ Sparkle & Shine
Stamp, Scrap & Doodle Saturdays ~ An open theme
TFL
Posted by Jac’s Playground at 20:29