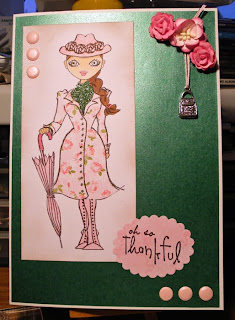 Ok so over at Dotties World this week Adele set the challenge to do paper piecing, this is a technique I learnt from the uber talented Louise right here at Dotties World in my early days of blogging, I had heard of it but didnt know what it was but ever since my first attempt back then with Dottie herself I've never looked back and it is a technique I use every now and again and I like the results, so this time I decided to use Holly in England from the World Tour collection, now normally I think of Holly as more sort of autumny/wintery so I decided to give her an english rose coat! I actually rather like the effect wasnt sure how it would look when I started! The paper is papermania signature range Blueberry Hill and I also used paper from the collection to paper piece her hat, boots and umbrella then I added glitter to her scarf/top and coloured the rest with copics. I sponged some ink around the edge of the image as the white was too stark then I added some card candy, flowers and a handbag charm, the sentiment is from TGF Spotlight set. Ria has already claimed the card for a friend she walks to school with who is moving at the end of this school year and apparently she is after a coat just like this one! TFL
Posted by Jac’s Playground at 21:37