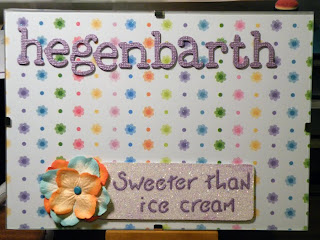 When I got home from work yesterday 2 hours later than I should have Ria told me she would like a present for friends at school who were twins and their birthday was tomorrow (today!) I was already very tired but toddled off to slimming world then on my return home set to. We have already altered small frames for some of her other friends which have always been well received so that was the plan again. Now these girls call themselves the Hagen das girls as their name is Hegenbarth and Ria wanted to use this on the frame so we put their name on cut from purple coredinations shiny card using sizzix tag alpha then added a tag to the frame which was actually a self adhesive flower fairies tag but I used the self adhesive side to add the phrase 'sweeter than ice cream' (Rias idea) and then covered it with glamour dust then added a couple of y prima flowers and a brad to tie in with the background paper which is from the DCWV glitter stack which is on the inside. The idea is for the girls to add their own photos. Apparently they were really pleased with it I was just really pleased to get to bed last night! or should I say this morning!!! lol
Posted by Jac’s Playground at 20:33