Well I keep hearing 'steampunk' being mentioned and had looked it up a couple of weeks ago which is just as well as while out shopping with Ria she said something about some jewellery being steampunk and I surprised her by knowing what it was!  Anyway I won some images from Tickled Pink so I decided to get the steampunk Lil Victorian Lilith (& Luca) and when I was checking out the challenges found that Try It On Tuesday had Steampunk for their challenge so decided it was time to give it a go.  LIlith is coloured with copics and a touch of stardust, my paper is Raspberry Road Designs - Artclass 100, I tried a little bit of machine sewing with my new £20 sewing machine!  It still didnt feel very steampunk so I found an old silver earring and altered the colour using meadow & currant alcohol inks then I decided to go all out and try using a coke can which I used a Nellies Nesting die to cut out then I lightly sanded it added drops of alcohol inks and swiped them around and finished it off by embossing it with the text embossing folder.  Added a couple of flowers and a button and it was finished - not sure if it is really steampunk will have to check with Ria tomorrow as she is away on a school trip tonight.  Like the effect of the can though. 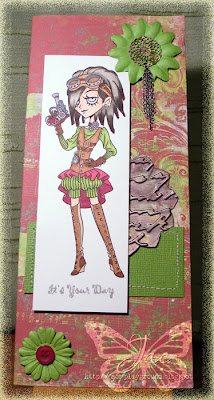 I would also like to enter this into the following challenges:
Sunday Sketch & Stamp #64
OSAAT #71 ~ Flowers
Tuesday Throwdown #58 ~ Something metallic
Crafts and Me #44 ~ Add a flower
TFL